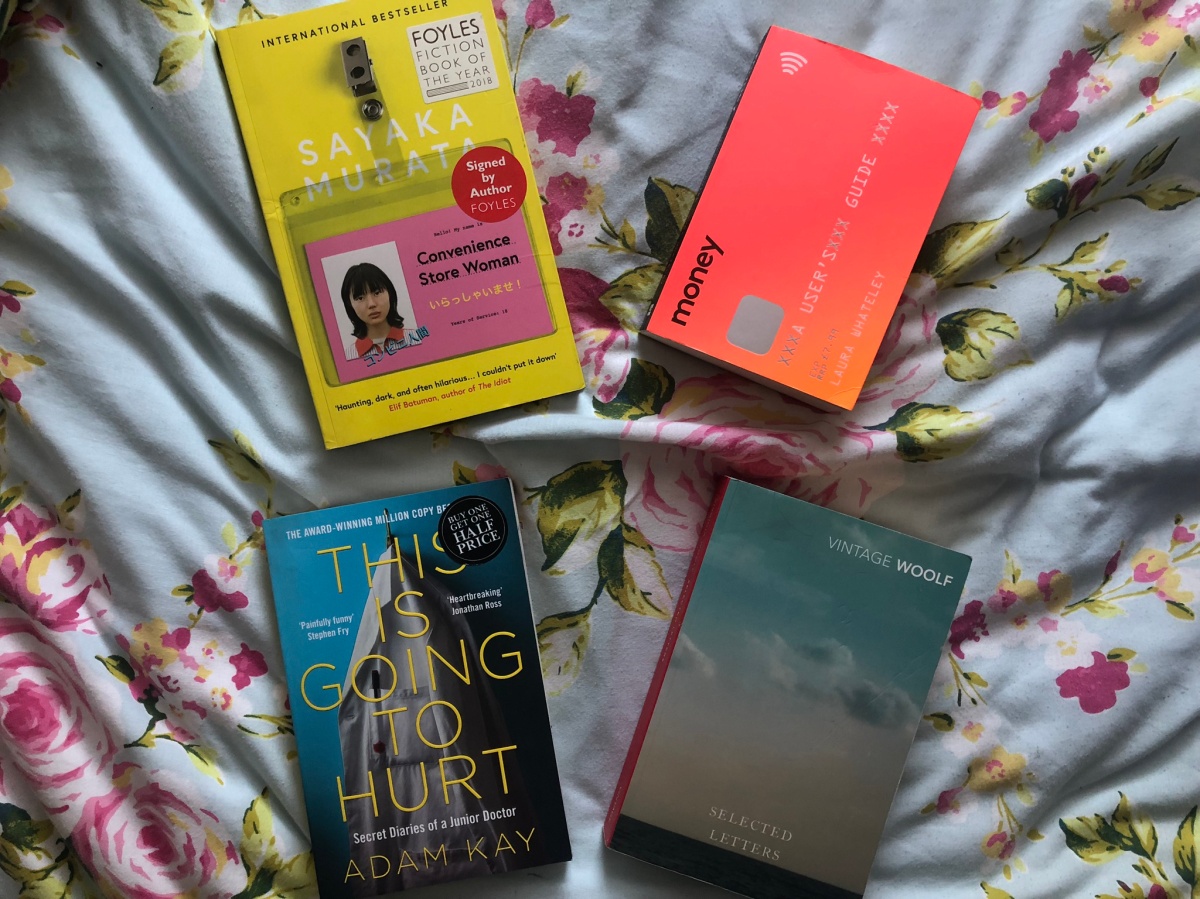 This is a bumper post as whilst I had a fairly quiet start to my reading year, I soon made up for it and have read eight books over the past two months; one of which might just be a new all-time favourite…

Municipal Dreams: The Rise & Fall of Social Housing by John Boughton (2018, Verso)
This first book is perhaps not going to be everyone’s cup of tea but I really liked this. I picked up Municipal Dreams when I visited the Living with Buildings exhibition and was feeling inspired and interested in all things housing. Boughton does what he says in the title, which is explore the history of social housing from its beginning through to its decline, covering both the social history and the architectural. Boughton clearly cares deeply about his subject, and it is both interesting and depressing to see how something as vital as affordable housing has been marginalised over the years. It is quite stat-sy at times and I could have done with either less architecture or more images of the sites the book was referring to. However, if this is a topic you’re interested in it (and the Twitter account of the same name) is worth a read.

Circe by Madeline Miller (2018, Bloomsbury)
I read and loved The Song of Achilles way back in 2012 when I was 19 on a family holiday in Spain. So to say I have been eagerly awaiting Miller’s second novel is something of an understatement. Circe follows the titular character, the daughter of Helios, Titan and God of the Sun and a beautiful nymph. She, however, turns out to be neither God-like or beautiful and is shunned by her beautiful but cruel siblings. Her desperation for companionship leads her to reveal her one gift, which is forbidden to the Gods and Titans, witchcraft. Her banishment leads her to spend her years alone, but appearing in many famous Greek myths. Despite being familiar with many of the stories that Circe interacts with, I didn’t have much memory of her as a character, so Miller’s re-telling almost felt like an entirely new story. It’s beautifully told, with settings vividly bought to life and characters like Odysseus, Medea, the Minotaur and Jason (of the Argonauts) given fresh life. Circe is at times infuriating, at times cruel and at times hugely courageous. At its heart, this novel is a woman’s journey to self-acceptance, beyond the approval and love of men, and I was thrilled to be alongside Circe as she travelled.

Selected Letters by Virginia Woolf (1990, Vintage)
It feels a bit strange to review someone’s personal correspondence! Like her diaries, which I read in 2014, these letters are perhaps not vital reading unless you’re already a fan of Woolf or interested in the wider Bloomsbury Group. These letters are witty, kind, caustic, gossipy, romantic and at times cruel and at others give insights into Woolf’s political views. Her regular correspondents include her sister the artist Vanessa Bell and Vita Sackville-West. I was struck reading these again just how modern the romantic arrangements of many of Woolf’s contemporaries were. The letters also show some of the largest moments in European history pass by as if background noise – although the Second World War does impinge on her later letters. The collection, of course, concludes with her suicide note to Leonard – a sad conclusion to such a varied  collection.

How Do You Like Me Now? by Holly Bourne (2018, Hodder & Stoughton)
This is Holly Bourne’s debut adult fiction novel, and follows Tori Bailey who wrote a bestselling, no-f!!cks given memoir which sounds like a more sweary version of Eat Pray Love complete with her meeting the perfect man Tom at the end. However, years on, and her relationship has hit a wall, she can’t come up with a new book idea for her fans and her best friend falls in love. I liked how well Bourne captured social media interactions; the Facebook, Instagram and other posts that are scattered throughout feel authentic and not cringey. Bourne also excellently strips back Tori’s pretty abrasive and irritating personality to reveal her mass of anxiety. However; I did just find this book painful to read. Whilst I appreciate honesty, it felt unrelentingly depressing – from parents who didn’t want to be parents, the collapse of Tori’s relationship and her friend basically having a personality transplant, I just wanted a bit of light at the end of the tunnel. Perhaps as I’m approaching my very much mid-20s still very single this hit too much of a nerve – I’m just hoping Tori is happier somewhere!

In Extremis: The Life of War Correspondent Marie Colvin by Lindsey Hilsum (2018, Chatto & Windus)
In Extremis has earned its place on my favourites shelf. An interview with Lindsey Hilsum on The High Low placed this book high on my to-read list, and I’m so thrilled that I have read this excellent biography of Marie Colvin. For those who don’t know, Colvin was a foreign correspondent latterly for The Sunday Times and reported from across the Middle East, Chechnya, East Timor and Sri Lanka where she lost her sight when she was shot by the army. She was killed by government forces in a Syrian airstrike in 2012 at the age of 56.  Pulled together from interviews and Colvin’s numerous personal diaries, Hilsum draws an excellent portrait of a formidable woman whose life was one of contradictions – living between the dangers of a war zone and a desire to find stereotypical romantic happiness at home. Her achievements in East Timor and Chechnya were unknown to me, and I feel grateful for her bravery in forcing people to see what they did not want to see. In an era where journalists are constantly dogged with accusations of bias it is inspiring to read of someone who had ‘the faith in humanity to believe that someone will care’ about her work. I really, really recommend this.

Convenience Store Woman by Sayaka Murata trans. Ginny Tapley Takemori  (2016, Portobello)
I don’t think I’ve come across a book so raved about as Convenience Store Woman for a while. Winning Foyles’ Book of the Year, I felt the need to see what the fuss was all about – and I feel like I might have missed something. This little novel follows Keiko Furukura who has always struggled to feel ‘normal’ until she finds a part-time role in a convenience store, where a employee handbook gives her detailed instructions on how to live. However, approaching 40, the pressures of the outside world wanting her to get married or a ‘proper’ job begin to impinge on her life. There are moments in this book that are quite darkly humorous, and Murata is great at capturing settings and situations – particularly the get-together Keiko goes to with her mostly married friends. As a commentary on societal expectations this is interesting; but then seems to get its messages blurred – is being a cog in a capitalist machine preferable to ‘fitting in’, even if that too is time-limited? Plus, it appeared that we were supposed to have some sympathy for a character whose views on women were pretty nauseating because he too was an ‘outsider’. An interesting read, but not worth the hype for me.

Money: A User’s Guide by Laura Whateley (2018, Fourth Estate)
This book is a great guide to everything you want to know about money, but might be too nervous to ask. Aimed at millennials who are in employment and possibly renting; this book covers everything from how to be a good tenant to paying off debt to saving for a house – with nothing about how giving up brunch will solve all your problems. I also really appreciated the sections in the back about the impact money can have on your relationships, and how to ensure your money is supporting causes you care about. This book is staying on my shelf for some time to come.

This is Going to Hurt by Adam Kay (2017, Pan Macmillan)
I am well aware that I am massively late to the party in reading this book, a diary/memoir of Adam Kay’s time training as a doctor in the NHS. It was originally published when the Junior Doctor pay disputes had to strikes and pretty horrendous attacks by the government and the right-wing press. This is at times hilariously funny and at others really sad – making me both laugh and cry in public. It was possibly a bit more scatological than I would have preferred – as Kay trains in obys & gyns – making it not something to read whilst you are eating or drinking. I feel like it would have also been nice to see a bit more attention and acknowledgement given to the other staff in the hospital – but appreciate that this is based on his own personal reflective journals which are by nature going to be focused on him. It was eye-opening to see just how crazily hard doctors work – the hours are insane and anyone who thinks them asking for money is greedy needs to take a long hard look at themselves (there is a great moment where Kay realises the parking meter is earning more than him an hour). A funny love letter to our NHS, I’d recommend reading this before it pops up on the BBC later this year.

One thought on “Two Months in Books: January & February”